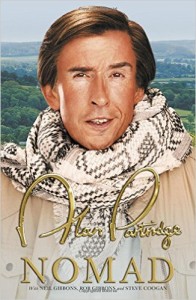 Alan Partridge is back, and this time he’s documenting his epic journey that saw him traveling across (some parts of) Britain, and he’s keen to stress, it was not for charity.

If you’re unfamiliar with Alan Partridge then the first thing you should probably know is that he’s not real. He is in fact a fictional comedy character created by British writer and comedian Steve Coogan. However, it could be argued that, in some ways, Alan is real. He’s real because we can all relate to him in some way. Like Ricky Gervais’ David Brent or Louis CK’s Louie, he represents that (hopefully) small, insecure part of us that desperately wants to be appreciated, noted, and celebrated.

Following his excellent autobiography I, Partridge and his excellent 2013 film Alpha Papa, Partridge is back with this book which chronicles an epic walk he embarks upon in the footsteps of his father. Along the way he’ll battle the elements (a bit of rain), be forced to use his wits to survive in the wild (a nature reserve he gets lost in for four hours), and encounter a man who may or may not have been Jesus Christ.

Not only does Nomad recount Alan’s epic odyssey across Britain, but it also bring us up to date on what Alan has been up to since the events of Alpha Papa and treats readers to more of Alan’s sage advice and amusing anecdotes.

Long time fans of Alan Partridge will no doubt find this book to be every bit as entertaining as his past exploits but Nomad is also a great way for newcomers to get on board. Though it references past events, Nomad is mainly self contained and no prior knowledge of the Partridge mythos is required for it to be enjoyed.

It should also be mentioned that the audiobook version is read by Steve Coogan in character as Alan. It’s hard to describe why it’s even funnier to hear Partridge himself narrating the events of his romp across Britain but Coogan’s reading really brings it all to life. I got a lot of strange looks listening to this in public as I tried to stifle my laughter. If you’ve got a long commute, Nomad will make it fly by.