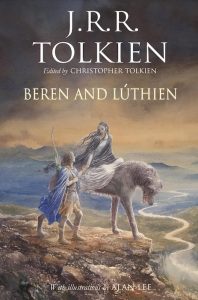 J.R.R. Tolkien is rightfully considered the father of modern fantasy, and it’s not hard to see why. Taking inspiration from myths of old such as Beowulf and Grendel, Tolkien created a vast new land full of detail named Middle-Earth. Most readers will be familiar with the lands of Middle-Earth due to The Lord of the Rings which, along with The Hobbit, should be the first stop for anyone looking to give the fantasy genre a go.

While the aforementioned books are easily the most famous novels set in Tolkien’s legendarium, the events of the War of the Ring scratches only the surface of Middle-Earth’s lore. There are thousands of years worth of material that is only referenced in The Lord of the Rings, and readers can explore the bygone eras in The Silmarillion, a dense tome that chronicles the world of Middle-Earth from its creation to the beginning of the events that saw a young Hobbit travel to Mordor. The Silmarillion informs the reader of the many important events that shaped Middle-Earth, and perhaps the best-loved of those tales is that of Beren and Lúthien.

Those of you who are familiar with the events of The Lord of the Rings will no doubt be aware of the mortal man Aragorn who, over the course of the books, transforms from a rugged ranger into the rightful king of Gondor. As though the burden of his heritage isn’t enough to keep him occupied, Aragorn struggles with his romance with the Arwen, the half Elf who, like the rest of her kin, must choose to either embrace her Elven side and become immortal, or instead choose a mortal life. For many of us, the choice of life versus death is an easy to make, but Arwen’s love for Aragon made dying with him more appealing than living for an eternity alone. Aragorn felt guilt over his role in Arwen wishing to reject her immortality with the Elves and for years he grappled with his romantic feelings for her and his desire for her not to choose death for him.

Those who have only read The Lord of the Rings (or seen Peter Jackson’s excellent films) would be forgiven for assuming Arwen and Aragorn’s romance was the first of its kind in Middle-Earth, but in fact it is reminiscent of a romance between two of her ancestors many years ago; the romance of the mortal man Beren and the Elf Lúthien.

Not only is the tale of Beren and Lúthien easily the fantasy genre’s Romeo and Juliet (sorry Twilight), it’s also a tale that is arguably the most personal to Tolkien, as it is inspired by his own romance with his wife, Edith Tolkien. So close to Tolkien’s heart was this tale that, shortly before his death, he made instructions for he and his wife’s graves to bear the names ‘Beren’ and ‘Lúthien’, respectively. Tolkien personally considered Beren and Lúthien to be one of the most important stories he ever told, and it’s not hard to see why the tale is considered a favourite by many who read The Silmarillion. Given its importance to both its author and the world of Middle-Earth, a stand-alone edition of the story was published and includes a great deal of extra insight into the romantic tale.

The tale begins when the mortal Beren happens upon the beautiful Lúthien dancing in the woods. Despite their differences, the two soon fall deeply in love but Lúthien’s father, King Thingol, feels Beren is beneath his daughter and declares he will only allow the two to marry should Beren complete a seemingly impossible task; returning at least one of the precious Silmaril jewels that had previously been stolen by the dark lord Morgorth, the same dark lord Sauron once served. Undaunted due to his love for Lúthien, Beren sets off on his quest and is aided along the way by his love.

While Beren and Lúthien serves as an excellent and touching fantasy romance story on its own merits, its connection to John and Edith’s own romance makes it more than just a gripping yarn. Both orphaned at a young age, Edith and John first met when she was 19 and he 16. The two quickly became close but Tolkien’s guardian felt she was a distraction from the young man’s studies and forbade him for seeing her until he turned 21. The relationship also drew controversy due to that fact Tolkien was a Catholic and Edith was an Anglican.

Not wishing to disobey his guardian, Tolkien stopped seeing Edith but later described those years as “extremely hard”. Time apart didn’t quell Tolkien’s feelings for Edith and, on the evening of his 21st birthday, Tolkien wrote her a letter explaining he never stopped loving her and asked for her hand in marriage. Despite already being betrothed, Edith called off her engagement and agreed to marry him. Many years later, in a letter to his son, Tolkien expressed his admiration for Edith’s willingness to marry a man with no job, little money, and no prospects except the likelihood of being killed in the Great War. The difficulties faced by the young couple in their early lives sowed the seeds for the tale and the scene in which Beren first encounters Lúthien dancing in the woods is directly inspired by a time when Edith danced for Tolkien in a glade of Hemlocks.

Beren and Lúthien went through a number of iterations before it was eventually published in its current form in The Silmarillion, not long after Tolkien’s death. This stand-alone edition not only sees the tale printed in its own book, but also allows readers to see how the tale shifted and changed shape as Tolkien’s vision of Middle-Earth came to life. The book is no mere cash grab and includes notes and edits from Christopher Tolkien, who pored over his father’s manuscripts. Excerpts from The Silmarillion and Lost Tales are also present and notes from early drafts and poems allow readers to see just how this tale came to life, as well as what changes Tolkien elected to make. This edition also features beautiful hand-drawn illustrations from veteran Tolkien illustrator Alan Lee, and stands as the definitive edition of this important tale in Tolkien’s mythos.

Alongside The Hobbit and The Lord of the Rings, Tolkien considered Beren and Lúthien (along with The Children of Hurin and The Fall of Gondolin) to be the main pillars of his fantasy world. The recent stand-alone editions of these tales serve as an excellent way to see how these stories evolved and as a great way for newcomers to jump in and understand a little more about the world of Middle-Earth before tackling the somewhat daunting Silmarillion. Those who are already familiar with Tolkien will find a wealth of new content here thanks to Christopher’s annotations.

The Hobbit and The Lord of the Rings are still the best place to begin for those new to Middle-Earth, but Beren and Lúthien serves as an excellent bridge for those wanting to travel deeper into Tolkien’s world. As always, Christopher has done an impeccable job in editing and delivering his father’s vision (at the age of 93!) and this stand-alone edition serves as a worthy installment to Tolkien’s works.