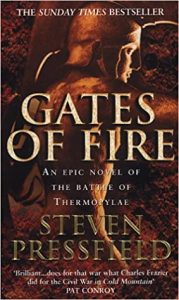 Over 2,000 years ago the Persian empire, led by the great king Xerxes I, descended upon ancient Greece with the largest army the world had ever seen, ready to kill Western democracy in its cradle. Despite facing hopeless odds, the Spartans dispatched a force of 300 of their own men, along with a few hundred allies from other Greek states, to hold off the Persian forces long enough for the rest of Greece to rally an army large enough to defeat Xerxes.

In 480 BC, in a far-flung corner of Greece known as Thermopylae, the Spartans and their allies managed to stall the Persian advance for three days before they were finally overwhelmed. While some of the Greek forces chose to retreat, the Spartans, along with their Theban comrades, fought to the last man, covering their allies’ retreat and buying the rest of Greece enough time to muster its main force. Xerxes eventual defeat of the Spartans is seen as a textbook Pyrrhic victory, and the battle of Thermopylae is remembered to this day as one of the greatest last stands in history, cementing the Spartans as arguably the finest warriors the world has ever known.

A historical novel, Gates of Fire follows the Spartans who would go on to fight at that legendary battle. The story is told through the eyes of Xeones, a young boy whose own city is sacked and torched. With nothing left, Xeo travels to Sparta, where he becomes a Perioikoi, a free but non-citizen inhabitant of the city. Xeo works in service to the Spartan warriors, and before long finds himself the squire of a young Spartan boy named Alexandros. The book follows the boys as they undergo the brutal training of the Agoge, where Spartan boys were molded into soldiers, and follows them into adulthood until finally, they find themselves preparing for battle at the pass of Thermopylae. In the aftermath of the battle, Xeo is found gravely wounded but, inspired by the valour the Greeks displayed, Xerxes orders his surgeons to save his enemy’s life. Wanting to learn all he can about the men who defied a God-king, Xerxes has Xeo recount his life story to himself and his court.

Originally published in 1998, Gates of Fire was met with a strong response from both readers and critics alike. Given that Pressfield served in the US Marine, its unsurprising to find that he’s able to accurately portray the mindset of a group of elite soldiers, from their ferocity and violence to their humour and love for their family and brothers in arms. Gates of Fire isn’t just a gripping read for its historical accuracy, battle scenes, and excellently written characters, but also its deep examinations of themes such as fear, courage, honour, duty, and stoicism. So much so, that the book is on the Commandant of the Marine Corps’ Reading list. For those who haven’t served, it can be difficult for any piece of media to accurately express the bond formed by those who fight and bleed together, as well as the doubts and fears that even the greatest warriors struggle with as war approaches but, thanks to his writing skills, and his time spent in the armed forces, Pressfield manages to give readers a glimpse at that bond, while also perfectly capturing the typical dark humour common among soldiers.

While the book is told from the perspective of Xeo, it could be argued that the central character of the story is the Spartan captain Dienekes, whom Alexandros and Xeo serve under. Like many of the characters in this story, Dienekes was indeed real. While many of the names of the individual Spartans who died at the battle of Thermopylae have been lost, Dienekes’s is one of the only ones to have been recorded. The Greek historian Herodotus recorded that, while extreme bravery was shown by all the Greeks during the battle, it is Dienekes who is considered to have been the greatest of all. Not so much due to his prowess in battle, but more because of his unfazed reaction to the Persian forces. Herodotus tells us that, after being told that the Persian force was so vast in number that a volley of their arrows were known to block out the sun, Dienekes replied that this was a good thing, as it meant they would at least do battle in the shade.

As an older Spartan in middle-age, Dienekes isn’t presented as the fasted, strongest, or most glory-hungry of the Spartans he fights with (these accolades go to the Spartan Polynikes). Instead, Dienekes embodies everything any Spartan worth his shield would hope to be. While Dienekes is a skilled warrior, decades of war have turned him into somewhat of a philosopher. While dedicated to protecting his country and his city, and utterly loyal to Spartan society, it isn’t glory and fame that interests Dienekes, he wants to examine the nature of fear, to understand it, and to learn how a man may conquer it. Given that Dienekes is Alexandros’ primary teacher, Xeo is privy to much of the wisdom the old Spartan imparts on his protégé, and both the character of Dienekes, as well as his lessons will remain with you long after you’ve finished the final page.

While Gates of Fire has plenty of depth to it, it never shies away from presenting the reader with the horror of war. Just like a Spartan’s life, the book is punctuated by moments of extreme violence, from the downright abusive training the boys receive in the Agoge, to the blood-soaked battlefields they find themselves fighting on as young men. If you’re not comfortable with detailed violence, bad language, or the numerous horrors that accompany any war, then you may want to skip a few pages here and there. That said, I personally feel that any book, non-fiction or fiction, that wants to paint an accurate picture of the hell of war, should not shy away or sugarcoat these realities.

Given that Spartans were elite soldiers who were trained from the age of six to become killing machines, it’s impressive that Pressfield can so excellently balance our characters. On the one hand, they are indeed capable of extreme violence, but they are also capable of love, humour, and loyalty, and have friends, wives, children, and homes they cherish. When writing about the Spartans, it would be easy to make them appear as unfeeling killing machines, or as psychopaths who enjoy inflicting pain and suffering, but Pressfield avoids this trap. Instead, he brings to life fully fleshed out characters, and his descriptions of how broken and spent even these elite warriors feel after the chaos of combat remind readers that, for all the stories of the prowess in battle, the Spartans were still human beings. Nothing less, nothing more.

It’s true that the bulk of characters featured in Gates of Fire are male, but Pressfield does an excellent job of exploring the lives of Spartan women, who, while they didn’t fight beside the men, were just as fierce. Compared to most women of that time, women in Sparta enjoyed a great deal more freedom and were held in high regard by the rest of Greece for their nobility, natural beauty, stoicism, and power. When a Spartan man died, his lands went not to his children, but his wife. Given that a Spartan woman might marry more than once in her life, Spartan women controlled most of the land and wealth in Sparta. They were also well educated and went through their own training which aimed to make them strong and ready for childbirth. Even the most high ranking Spartan men were well aware that women were essential for producing more sons to fight for Sparta, and thus women were respected for their instrumental role in Spartan society. The ancient Greek historian Plutarch claims that Queen Gorgo, King Leonidas’ wife, when told by a foreign lady that only in Sparta do women seem to be able to rule men, replied: “With good reason, for we are the only women who bring forth men.” The unspoken power Spartan women possessed is ever-present and I often found I felt more intimidated by the Spartan women than I did the men. There is a quiet but undeniable strength to the women, particularly Dienekes’s wife Arete, and Pressfield cleverly shows they were able to subtly influence their men to suit their plans.

While predominantly about the Spartans, the book also cuts away now and then to show the story from the side of the Persians. Media portrayals of the Battle of Thermopylae often portray the Persians as one-dimensional invaders who wanted nothing more than to plunder Greece in the name of their mad king. In truth, of course, the Persians who came to conquer Greece were just as human as the Greeks, and Pressfield makes no effort to demonise them. Like all Persian Kings, Xerxes did believe himself to be a God on Earth, all his life he was told this was true, but Pressfield’s Xerxes is more than just a tyrannical dictator, and he is inspired and interested in these strange warriors who defied him.

As mentioned previously, Xeo, Dienekes, and Alexandros may be the main characters of the story, but I don’t believe any secondary characters aren’t just as memorable and as three dimensional, even if they get fewer pages dedicated to them. The Spartan king, Leonidas, despite being 60 at the time of the battle, bleeds on the battlefield alongside his men, and neither wants nor expects the kind of pomp and luxury one would usually associate with royalty. Readers will soon come to respect him for the dedication he has for his men as well as his country. No doubt many will sympathise with young Alexandros as he struggles to live up to his father’s famous name, something Dienekes is keenly aware of as he shapes the young soldier into a warrior. I even found myself liking the Spartan champion Polynikes, who I at first considered an arrogant, fame-hungry warmonger, but ended up having a deep respect for considering the valour he shows during the novel’s climax. Pressfield’s dialogue is refreshingly authentic, and I was often grinning at the banter exchanged between the warriors as they prepared for battle or endured harsh training regimes. It’s rare for a piece of media to elicit tears from me, but I’m unashamed to admit that I found myself getting teary-eyed more than once throughout the book. There’s no denying it packs a serious emotional punch.

Pressfield’s writing style is short and sweet, and he doesn’t waste time on overly descriptive passages or superfluous details, something the Spartans would no doubt approve of. I also enjoyed the way he uses short sentences to punctuate his points. It should also be noted that there are occasional hints now and then that the Greek Gods are at play in this story, but it’s really up to the reader to decide. This is by no means a fantasy novel, it’s very heavily grounded in history, but appreciate that Pressfield does give a nod to the mythical being who played such an important role in shaping Greek society.

This review is becoming somewhat verbose, something the Spartans wouldn’t approve of, so I better wrap it up here. Gates of Fire is easily one of my favourite books, and it’s the sort I often find myself pushing on my friends to read.I’ve read it several times over the years, and it only seems to improve with age. If you’re a fan of historic fiction, military history, or history in general, then you should absolutely pick up a copy. If you’re not generally a fan of these genres, but you like what I’ve described, then you should still give it a go. This book is a fitting tribute to the soldiers who fought at Thermopylae, and Pressfield ranks as one of the finest writers of historic fiction to date.