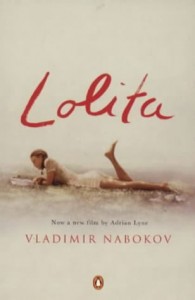 “He broke my heart. You merely broke my life.”

lolita is a book that I’ve had on my reading list for years. It’s a modern classic and, just from from the few quotes I’d seen from the book, it was clear that it’s a beautifully written novel. Given its controversial subject matter, there was part of me that was putting the book off. I finally decided it was high time I gave it a try and quickly discovered it was one of the most compelling and thought provoking books I’ve read in years.

Lets not beat around the bush. Lolita tells the story of a middle-aged man named Humbert Humbert who falls in love with a prepubescent young girl really named Dolorous. Humbert works his way into Dolorous’ family and eventually the two embark on a road trip across the United States as our humble narrator tries to convince us that his love for Lolita is true. Controversial stuff, both now and when it was first published. The book was banned in Britain for several years and, in 1955, the Sunday Express’ editor called it “sheer unrestrained pornography.” Nabokov was certainly on thin ice when he decided to start writing this. Despite its controversy, Lolita has still managed to become a modern classic and is frequently brought up when publications compile lists of the best books around.

The first paragraph of Lolita proves that Nabokov, despite writing in a foreign language, is a master of the written word. He’s not just putting his best foot forward, the entire book is pure poetry and the skill with which Nabokov writes captures the reader’s imagination and manages to make such a difficult subject much easier to stomach. It’s as if the writing flows like a calm river and there were points where I could so clearly imagine the characters that it almost feels like I’ve watched a perfect film adaptations (I’ll be sure to check out Kubrick’s film soon!). Nabokov’s skill at writing had me, just for a moment or so, feeling sympathy towards a man who is essentially a child molester and, even more surprisingly, there were times I genuinely believed his love was true. Then of course I would feel guilty for sympathizing with our deviant protagonist/antagonist and I would have to remind myself his beautiful outpouring of love was aimed at a child. Such is Nabokov’s ability to prod at the reader’s sense of morality.

As I mentioned, Lolita has been described as erotica by some and as mere porn by others. I have to disagree with this. Whilst it’s true that the book does contain sexual encounters between Humbert and Lolita, it is written in a way that is not at all graphic and, if you’re not paying attention, you could well not realise what they’re up to. I really get the sense that Nabokov had no real intention of titillating or shock, at least not in a sexual way. There are no curse words and no graphic descriptions. Those of you who have read the likes of A Game of Thrones or Fifty Shades of Grey will have read far bluer material than this.

I was also surprised to find that the book can be very comical at times. Humbert is aware of how absurd the situation he’s in is and he often acknowledges that readers will no doubt be disapproving of actions. The Independent described Humbert as the funniest monster in modern literature and it’s easy to see why. For example, after describing a moment of intimacy with Lolita, Humbert acknowledges that the reader’s eyebrows must be hitting the ceiling.

One of Lolita’s most compelling, and perhaps darkest, aspects is the fact that Humbert is an unreliable narrator. Perhaps intentionally or not, Humbert often glosses over certain aspects of Lolita’s behavior and he rarely attempts to see how things may look from her point of view. The novel is about him, not her. It can be easy to miss but there are certainly signs which show that Lolita may not be as happy as our narrator assumes. Perhaps she begins the novel with an attraction to Humbert after all, she does instigate their first moment of intimacy, but as the book progresses her behavior becomes more erratic and she develops a disgust for Humbert. Whether or not Humbert is truly aware of the toll his actions are having on the young girl are known to him is up for debate. I would be fascinated to read an alternative version of Lolita written from her point of view.

Is Humbert a monster or does he genuinely believe his love is pure? Is Lolita an innocent victim or is she partly to blame for inviting the attention of our narrator? Does he deserve our disgust or sympathy? The way Lolita questions our sense of right and wrong is what has made it such a classic, the gorgeous prose doesn’t hurt either. I would certainly recommend this book. You may love it, you may consider it filth, but you won’t soon forget Lolita.