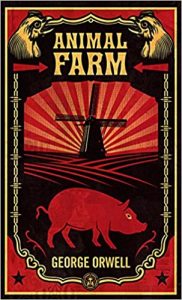 At a glance, one could be forgiven for assuming that Animal Farm is just a nice children’s story about a group of farmyard animals who, tired of being treated unfairly by their master, rise up to run the farmer out of town and live together in a utopia where all animals are equal. However, Animal Farm serves as a commentary on socialist Russia, communism, and how dictators will abuse freedom in order to seize control.

Animal Farm was inspired by the Russian Revolution and Stalinism and serves as a warning as to how a revolution can pave the way for a tyrant even worse than the last. Many of the animals in Animal Farm are meant to represent real life figures such as Stalin and Trotsky and the novel has gone on to become one of the most famous and important books ever written.

Our story begins when a Boar named Old Major, representing Karl Marx, gathers the other animals on the farm and tells them about his vision of a future where animals no longer have to work for humans and where they can all live together as equals. Old Major soon passes away but his ideas live on. The remaining animals stage a revolution and kick their master from his farm. Two pigs named Napoleon and Snowball (Stalin and Trotsky) take over as leaders and help the other animals begin building a utopia. However, Napoleon and Snowball begin to disagree on how the farm should be run and Napoleon eventually has Snowball exiled. A smaller pig named Squealer (who represents propaganda) is charged with spreading lies about Snowball to the other farm animals.

The pigs take control of the farm and soon begin to live more comfortably than the other animals. They begin to trade with humans and before long the laws of Animal Farm are changed to better favour the pigs. One rule which once read: “All animals are equal” later reads “All animals are equal but some animals are more equal than others.” The pigs begin to become so similar to their former human masters that they begin to wear clothes and even start walking upright. By the end of the novel, the remaining animals look at the pigs, then look at the humans, and can’t tell either apart.

It would be fair to say that the average person has, at best, an average understanding of socialism, the Russian Revolution, and communism, I certainly do, but that’s why Animal Farm is so important and so excellent. It is able to break down these complicated ideas into an allegory that allows everyday people to understand the pitfalls of revolution and the power struggles that inevitably follow.

Animal Farm may specifically be a critique on Stalin’s Russia, but it’s message is one that all readers should take to heart, regardless of where you’re from. It’s worth remembering that a revolution, by definition, is destined to end where it started. I would recommend Animal Farm to anyone and I think it’s a book that everyone should read at least once in their life. Remember, the word ‘utopia’ comes from the ancient Greek word for ‘no where’ or ‘no place’. Them Greeks are wicked smart!