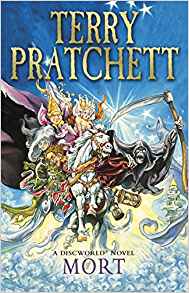 Despite the fact that I’ve been reading from an early age, I’m ashamed to admit that I’ve never properly checked out Terry Pratchett and his Discworld series. Given that Pratchett critically acclaimed books appeal both to adults and children, it seems absurd that they never made their way on to my reading pile. As a child I was busy reading The Hobbit, The Lord of the Rings, The Edge Chronicles, Harry Potter, and Chronicles of Ancient Darkness, and alas Pratchett never got a look in.

Still, he seems to have done pretty well without me and as an adult I became more aware of Pratchett, particularly after he was diagnosed with Alzheimer’s disease and began campaigning for more research into its causes and treatments. He seemed a wonderful man, and I just regret that it has taken me so long to explore his writing.

I felt pretty intimidated when it came to diving into the Discworld series. With over 40 books spanning decades, I didn’t know where to start. Does one need to begin from the first book published, or in chronological order, or from some other angle? After a bit of research I soon discovered that Pratchett’s Discworld series is far more welcoming to newcomers than it at first seems. Sure, the series is made up by an entire bookshelf’s worth of novels but, though they interweave with other entries, the stories themselves are quite self contained and can still be enjoyed by readers who have no prior knowledge of the Disc. Mort is in fact the fourth book to be published, but it still felt easy to follow and I didn’t feel as though I was missing out on any vital information. Arguably one of the most popular entries in the Discworld series, I’d heard much praise for Mort over the years. With that in mind, I decided that I would choose it to be my passport into the Disc, and I wasn’t disappointed.

Mort follows a young lad named Mortimer who, after failing to find a job, is taken up as an apprentice by none other than Death himself. Death certainly looks every bit as intimidating as popular depictions, but he’s actually a pretty nice guy. He sees his job as a necessary service which he performs respectfully. He enjoys a good curry, and rides a horse named Binky. Unfortunately, Death has found himself in a bit of a rut and, after showing Mort the ropes, decides to take a holiday. In an effort to better understand the people he guides off the mortal coil, Death tries his skeletal hand at fishing, dancing, and binge drinking. Meanwhile, Mort causes cataclysmic problems after he refuses to kill a beautiful princess. With Death gone fishing, it’s up to Mort, Princess Keli, Death’s adopted daughter Ysabell, a bumbling wizard, and Death’s mysterious servant to prevent Armageddon. 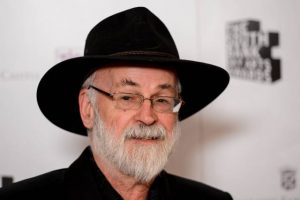 All the characters featured in Mort are memorable, but in my opinion it’s Death who steals the show. On the surface, Death appears to adhere to the usual tropes seen in popular culture. He has the body of a skeleton, he wears a long black robe, and he carries a scythe with him at all times, but that’s really where the similarities end. It’s highly amusing to see Pratchett subvert the usual tropes and he instead presents us with a harbinger of Death who is much more philosophical, three dimensional, and likeable than most depictions of the Grim Reaper. He takes no pleasure in snipping our mortal coils, he sees it as an important job that’s necessary for life to continue. He doesn’t get to decide who lives and who dies, he simply arrives when the time comes. As Death himself says: “THERE’S NO JUSTICE, THERE’S JUST ME.” I also enjoyed the way Pratchett pokes at more philosophical aspects of a being who is the first and will be the last. Though Death has a few close friends, none of them can fully appreciate what it’s like to be him. As Pratchett writes, Death is like the landlord of life. When all the punters have gone, it’s his job to stack the chairs and turn off the lights.

Anyone even vaguely familiar with Pratchett will know his books are beloved for their wit and humour, and I certainly got a good taste of that in Mort. Certain points in the book literally had me laughing out loud and, though I love the likes of J.R.R. Tolkien and G.R.R. Martin, it is refreshing to explore a fantasy world that doesn’t take itself too seriously and revels in mirth. I can just imagine Pratchett writing at his desk, smirking as he begins to write another amusing line. For instance, one chapter sees Death trying to get a job. It soon becomes clear he has no real life skills, so his interviewer suggests he become a teacher!

Pratchett takes jabs at all manner of topics, from religion to politics, but he always does so in way that’s playful. I doubt anyone could take any real issue with any of Pratchett’s digs and I often found that behind many of the jokes lay pearls of wisdom that had me reflecting. Like a good comedian, Pratchett makes you laugh and makes you think.

I’d highly recommend Mort and indeed Pratchett in general. If, like me, you’re a newcomer to the Discworld novels, then I would certainly suggest Mort as a great place to start. From there you can begin from the beginning, or jump into whichever title sounds most appealing. Like Pratchett’s fantasy land, it’s easy come, easy go. I’m sure more seasoned readers might have picked up on more references regarding past events, and had a better idea of the geography of the Disc, but I still had a thoroughly enjoyable time exploring this strange world that sits upon four elephants, who stand upon a giant turtle.