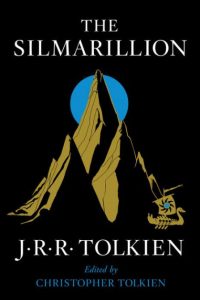 Okay, so I may have been on a bit of a Tolkien kick recently, but who can really blame me? The real world is so dreadfully dull, tedious and depressing, and it seems I can’t go five minutes without hearing about one terrible thing or another going on in the world. Dark lords, Balrogs and wayward wizards seem a welcome reprieve compared to what’s in the news these days. Am I being a touch over dramatic here? Mayhaps, but lets be honest, if you want to get away from it all and lose yourself in a fantasy world, you’re not going to do much better than Middle-Earth.

When you talk of Tolkien and Middle-Earth, most people’s mind’s will first jump to the War of the Ring and the adventures of Bilbo, Gandalf, and the company of Dwarves. The events of The Hobbit and The Lord of the Rings are easily the most well known when it comes to the history of Middle-Earth. Those events make up Tolkien’s best selling books and of course Peter Jackson’s excellent film adaptations of Rings further propelled those events into pop culture. However, if you think the history of Middle-Earth begins and ends with that pesky ring, then I’ve got good news for you, that only scratches the surface when it comes to the deep and rich history Tolkien created for his magical world. It’s almost akin to saying World War II was the only major event in human history.

If you’ve read The Hobbit or Lord of the Rings books, or seen the films, you may have some questions that go unanswered. Where did all these Orcs, Elves, and Dwarves come from? What exactly is a Balrog? Why’s Sauron so angry? And how are Elves immortal if they can physically die? Not only are all these question and more answered in The Silmarillion, the hefty tome reveals that the War of the ring is but a fraction of Middle-Earth’s history, and guides readers through the ages of Tolkien’s world.

Eager to Dive in to Middle-Earth’s History,

As a child, I was captivated by Jackson’s film adaptations, and I quickly read both The Hobbit and The Lord of the Rings to learn more about this amazing world. I was twelve by the time I got to The Silmarillion and, though I was eager to dive in to Middle-Earth’s history, I found it tough going. There’s no denying the book is far denser than either The Hobbit or Rings and the vast cast of characters, locations, and events were too much for my little head. I distinctly remember slogging my way through page after page in my school’s library, before I finally threw in the towel and decided to try it again in a few years. Overall, it’s a good thing that The Silmarillion is so incredibly dense and packed full of Tolkien’s lore, that means there’s more to enjoy, but there’s also no denying that this makes it daunting to newcomers to the books, and you’ll certainly want to know your Orcs from your Ents before you pick this one up.

So, as a child and teenager I remained within the Third Age of Middle-Earth’s history, and that’s certainly an interesting enough place to be but, having been a Tolkien fan for most of my life, and after having enjoyed the stand-alone edition of Beren and Lúthien, I decided it was high time I finished what I started over a decade ago.

While there’s no denying that The Silmarillion is much denser than most fantasy books, but I was relived to find that it wasn’t quite as overwhelming to me as an adult as it had been as a child. My love for Lord of the Rings may have made me over ambitious as a young lad, and in Tolkien’s defence, he almost certainly didn’t have kids in mind when he started writing this one.

As familiar as I am with Tolkien’s more mainstream installments, I still found myself having go back and remind myself of the importance of certain characters and locations, and not once or twice I had to open the laptop and spend a few minutes on The One Wiki to Rule Them All to fill in some gaps, but the more I read, the more I began to feel at home in these older ages of Middle-Earth. My confusion began to give way and I became more and more impressed at just how rich Tolkien’s world is and how its details rival that of real world history. I certainly have much more of a respect and understanding of how one can be referred to as a Tolkien ‘scholar’.

When I say The Silmarillion starts at the beginning, I mean it starts at the very beginning, with the creation story of Middle-Earth. Really, some of this book feels like you’re reading a religious text. Eru Ilúvatar is essentially the God of Middle-Earth, and he created divine spirits known as the Ainur to go forth and create and shape the world, also known as the Arda, which Middle-Earth makes up a part of. Men and Elves were then created by Eru to populate the Arda, meanwhile the Ainur created more magical creatures such as Dwarves, Ents, and Giant Eagles. Following the creation of Arda, the story then tells how one of the most powerful of the Ainur, a spirit named Melkor, rebelled against Eru and began making his own twisted creations. Evil began to take a foothold in this otherwise perfect world, Thus the forces of good and evil are at the ready and readers are then guided through the ages of Middle-Earth’s history as these two forces battle one another in an attempt for dominance.

The book’s namesake, the Silmarils, are the focal point of the book, and are three precious jewels created by the Elf lord Fëanor. Their beauty is such that they rival the divinity of Eru and the Ainur, and are coveted by all. These invaluable gems are arguably more important to the Arda than the One Ring and their mere existence is the cause of much of the motivations of the characters we meet, both good and evil. Much of Tolkien’s world looks the way it does today due to these stones, and their effects are still present by the time a young Hobbit finds an old ring.

Given that The Silmarillion begins many thousands of years before the Third Age and the events of The Hobbit and The Lord of the Rings, many characters who play an important role in the War of the Ring are still centuries, or even millennia, away from being born. That said, certain characters such as prominent Elves and wizards that appear in the Third Age are thousands of years old, and you can look forward to feeling their presence enter the world as you read.

Before reading The Silmarillion, I wondered how much one book could contain. Just a few chapters in I realised how little of Tolkien’s world I was actually seeing by sticking in the safe and warm waters of Middle-Earth’s Third Age. Not only did the book give me more stories to explore, it also helped to add a great deal of context to the events of The Hobbit and Rings, and I now find I have a much better understanding of both the early history of Middle-Earth, and indeed the events of the One Ring. As deep as The Hobbit and The Lord of the Rings are, they are just two pieces of a much larger puzzle. Know I properly understand why Gandalf was able to resurrect after his fatal fight with the Balrog, what the light is in the Phial of Galadriel, and the context for Sauron’s rise to power following the fall of his master Melkor, to name but a few events that have become clearer to me.

While The Silmarillion may, chronologically speaking, be the first book in Tolkien’s legendarium, I would absolutely advise newcomers to check out the end first by reading both The Hobbit and The Lord of the Rings. If you find yourself enjoying your time there, then I would advise you to check out The Silmarillion. Sure, you may find it hard going to begin with, but I promise the wealth of lore and history you’ll uncover makes it well worth the effort. I’ve no doubt this is the sort of book that has more to offer with each re-read, and I look forward to returning to Middle-Earth again soon.