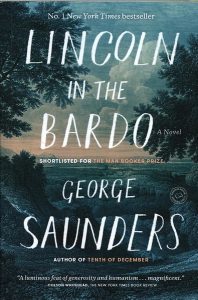 At the time of writing, COVID-19, also known as Corona Virus, has the world tightly in its grip and the majority of us are refined to our homes, remaining in isolation in the hopes that we might be able to starve the virus into an early demise. We may not quite be in the end times just yet (touch wood), but there’s no denying that this virus has given humanity a serious beating and has taken many lives since it first reared its ugly head. It’s morbidly fitting that it’s during this time I find myself reviewing a book all about death, George Saunders’ Lincoln in the Bardo.

Abraham Lincoln and Death of His Son

Easily one of the most unique books I’ve ever read, Saunders’ novel is the product of painstakingly researched history, along with a large dose of the supernatural, and sees a grief-stricken Abraham Lincoln coming to terms with the death of his son, Willie, who did indeed die at the age of 11. While much of the story paints a historically accurate picture of the 16th president of the United States during his, and his country’s, darkest hour, but, despite the realism, the book also delves deep into the realms of fantasy by having most of its action take place in the Bardo, an intermediate space between life and rebirth that’s found in certain schools of Buddhism.

The novel begins in the midst of the American Civil War, as Lincoln attempts to end slavery and unite his fractured country. His home life is thrown into equal disarray when his third son, William ‘Willie’ Wallace Lincoln, dies after battling Typhoid fever. Overcome with grief, Lincoln visits his son’s crypt and holds him as he tries to process his loss and find the strength to lead America onwards. Meanwhile, in the Bardo, we follow young Willie as he explores what lies between life and death and encounters other inhabitants, some of whom don’t appear to grasp the fact they’ve died. In fact, many of them insist on remaining in their coffins, which they refer to as ‘sick beds’ convinced they can still recover and return to their loved ones.

Three of the Bardo’s residents

We follow three of the Bardo’s residents, who do their best to welcome Willie to his new surroundings, while also taking great interest in the tall, strange man who keeps returning to visit the boy’s body. Resisting the various angels and demons who try to usher them into whatever afterlife awaits them, these three unlikely companions squabble among themselves about what to do with the boy and who the stranger is that keeps visiting.

It would be fair to say that Lincoln in the Bardo isn’t the most action packed book you’re likely to read, nor is it mean’t to be. There is no quest or mission, there are no good or bad characters, and, like death itself, you’ll be left with more questions than answers. The book is much more interested in exploring the nature of life and death and meditating on sin, virtue, comfort and suffering, and how difficult it can be for the living (and sometimes even the dead) to let go.

I found many passages of the novel to be extremely moving and, despite its use of death as a major theme, readers are reminded of the constant beauty that is all around us, even in our lowest moments. This is a book about death, but it’s also a celebration of life. As you might expect from a book that borrows from the Buddhist concept of the Bardo, there’s something zen about the wisdom the book imparts, and one passage towards the end about the suffering all living things must endure could have come straight from a wise Buddhist monk. It’s quite remarkable how much wisdom is hidden away in this relatively short novel.

In terms of its writing style, Lincoln in the Bardo reads much like a play, minus stage directions. However, when the narrative focuses on Lincoln himself, citations and quotes from a number of sources are used to convey the troubled president’s state of mind. Highlighting how difficult it can be to get an accurate picture of history, even relatively recent history, Saunders’ doesn’t shy away from using citations that completely contradict one another.

I must make it clear, it’s not all doom, gloom and heavy philosophy in the Bardo, in fact, I was surprised to find there is a certain dark humour laced throughout the book. Our three main characters are unlikely to have ever willingly been friends in the land of the living, and it’s amusing to watch them struggle to put up with one another in the afterlife, much like a dysfunctional family. There’s certainly some heart wrenching moments in the book, especially if you happen to be a parent, but there are also moments of levity that serve to balance it out like a Yin-Yang

One passage in particular struck me deeply, and concerns two souls dammed to hell lamenting their torment and questioning how fair their punishment really is. They’re both guilty of serious crimes worthy of damnation, but they make an excellent case in arguing that there is no crime that is truly befitting of eternal torment. Eventually, even the most evil souls will reach a point where their suffering surpasses that which they caused, perhaps making further punishment unjust? I’m impressed by any book that is able to make me take a good, hard look at my own beliefs.

If any of what I’ve written intrigues you then I highly recommend you give Lincoln in the Bardo a go. It’s certainly one to check out if you’re looking for something a bit different. It may not be everyone’s cup of tea, and that’s fine, but it’s certainly one of the most unique books I’ve read in a long time. I read the physical book version, but it’s worth noting that there exists an excellent audiobook version which sees a great cast, including Nick Offerman, Ben Stiller, Bill Hader, Megan Mullally, Rain Wilson, Kat Dennings, and George Saunders), that I’m definitely going to be checking out, and might be of interest to those of you who prefer audiobooks to paper or tablets.

Lincoln in the Bardo made me feel happy, sad, hopeful, hopeless, and optimistic, sometimes all at the same time, and you could certainly do a lot worse if you’re looking for something to keep you occupied while you self isolate. Stay safe, everyone.