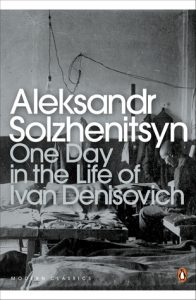 In 1945, author Aleksandr Solzhenitsyn was arrested and sentenced to eight years hard labour in a gulag for making anti-Stalin remarks in his private letters. Upon his release, Solzhenitsyn published a semi-autobiographical novel which allows readers to follow a day in the life of a gulag inmate named Ivan Denisovich, as he struggles to get through another day in the face of starvation, crippling physical labour, unbearable cold, cruel guards, and poor health. One Day in the Life of Ivan Denisovich was published after the death of Stalin, and only then with Khrushchev’s permission, the novel allowed both Russia and the rest of the world to see the harsh realities of living under Stalin’s rule.

The story begins several years into Denisovich’s sentence after he was convicted of being a German spy during WWII, when in truth he was simply captured be the Nazis. As its name suggests, the novel focuses on an average day-in-the-life of Denisovich, and this typical day doesn’t see our protagonist experience anything out of the usual, but still offers an interesting insight in how prisoners were able to survive such harsh conditions with cunning and teamwork.

A system of hierarchy exists in the gulags. Of course, the guards are at the top of the food chain, literally and figuratively, and the inmates are ordered into different squads. Each squad has a leader who, while still being a prisoner, serve as the go between for the guards and the regular prisoners, as well as being responsible for ensuring their squad gets their assigned work done. Denisovich is just a regular member of the squad, but he makes it clear that a good leader can be the difference between life and death.

Life in the gulag makes most Western prisons seem like five star hotels in comparison. Even the most basic comforts are extremely hard to get hold of and the death of an inmate means very little to a guard. The most valuable commodity in the gulag is food, something that is sorely lacking. Inmates are only given a small ration of food each day, which usually consists of hard bread and porridge with water (sometimes mixed with sawdust). Food is something many of us take for granted and the novel made me realise how valuable food becomes when we aren’t sure when we’ll see another meal. An inmate spends most of his time and energy planning and thinking about their next meal. They have numerous tricks to make their rations last longer and one chapter describes how, after finishing a bowl of porridge, prisoners will use a rag to mop up the left over morsels and moisture and then suck every last drop of sustenance from the cloth. Solzhenitsyn remarks that the bowls looked freshly polished by the time dinner ended.

A prisoner’s time is spent mainly enduring forced labour, a brutal labour that, in Winter, is done in temperatures that can reach below −40 °C. Despite the freezing conditions, prisoners are only given the bare minimum to keep warm and they are forced to devise and fashion their own ways of making extra layers. The cold is so relentless that mortar must be continuously mixed to prevent it from freezing and the snow falls so hard that it piles up almost as high as the prison fences. Like all prisons, the gulag sees a great deal of trading between its inmates and a prisoner who greases someone else’s palm today may receive an extra ration or cigarettes tomorrow. You can never know what obscure item may become in demand and Denisovich is always on the look out for items to trade, items most of us would dismiss as trash.

While an inmate’s physical attributes can go a long way to ensuring survival, one’s attitude is also an important factor. While there is a certain element of camaraderie among those in the gulag, no one is abut to stick their neck out for someone else when it could end up being their demise. As mentioned earlier, a squad leader is in charge of ensuring their squad completes their tasks quickly and efficiently. There’s no room for dead weight and, given an entire squad can be punished for the failings of one member, those who don’t earn their keep aren’t tolerated for long.

As oppressive as life is in the gulag, I was surprised to find how our protagonist, along with the other inmates, don’t give in to self pity, though one could hardly blame them. There’s a sense of stoicism among the men and their dark humour gives way for an odd feeling of community. Despite enduring such a tough day, one of many to come, Denisovich ends the day with a certain feeling of pride for managing to survive, and believes luck has been on his side.

One Day in the Life of Ivan Denisovich may not be a light read, but I found it an interesting insight into the lives of these often overlooked people, and a keen reminder of how resilient humans can be and how easy most of us have it today. It’s not hard to see why this book is so important as a critique of Stalinism and socialism and its lessons shouldn’t soon be forgotten.