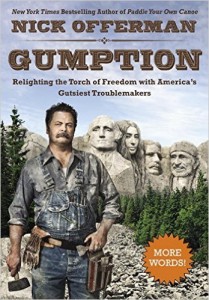 That’s right, another book by comedian/actor/writer/woodworker Nick Offerman. Perhaps, based on my review of his last book, you’re interested in reading his latest release but just need this esteemed critic’s view on whether or not Offerman’s latest outing is one worth going on. It is.

Maybe this shows the ignoramus in me but I was a little skeptical going into Gumption. The premise of the book is that Offerman has carefully selected 21 American men and women whom he believes possess gumption, a quality that is sorely lacking both in modern America and the modern world in general. The reason for my skepticism was that I feared perhaps non-American readers might feel a little less invested in reading about only American heroes. I appreciate there have been many great Americans, but only selecting American people seemed to be needlessly narrowing down the number of people who could be featured in the book.

Having finished it, I realise Offerman and his publishers knew what they were doing. Offerman’s book not only humorously informs the reader about great Americans but also serves as a light history lesson, particularly on early American history. Yes, it is more American focused that a book about great people in general would be, but there’s certainly nothing wrong with that and Offerman writes in a way that never feels overly patriotic or that he feels they’re somehow above heroes from other parts of the world.

The book is split into three parts with each part being comprised of Freemasons, Idealists, and Makers. Freemasons includes the likes of George Washington, Benjamin Franklin, and James Madison. Idealists introduces readers to folks like Theodore Roosevelt, Eleanor Roosevelt, Wendell Berry, and Yoko Ono, whilst Makers features people like George Nakashima, Laurie Anderson, Willie Nelson, and Conan O’ Brien. Each character is examined in the order they lived so along the way you get a nice feeling for the history that was/is going on at the time the person lived.

Earlier chapters that focused on founding fathers and well known figures in America’s early history were especially enlightening to this ignorant Brit (my early American history is lacking) and it was very enjoyable to have Offerman gently get me up to speed on names I’d seemed to be born knowing but didn’t actually know anything about. The chapter on Theodore Roosevelt is particularly entertaining. Did you know that the Teddy Bear is named after him because, despite being a big hunter, he refused to shoot a trapped bear because it would have been “unsportsmanlike”?

As you get further through the book, you’re bound to come upon some featured characters with whose work you may not be familiar with. Thanks to Offerman I am now eager to dive into some Wendell Berry books, listen to some Willie Nelson, and look up the creations of George Nakashima. 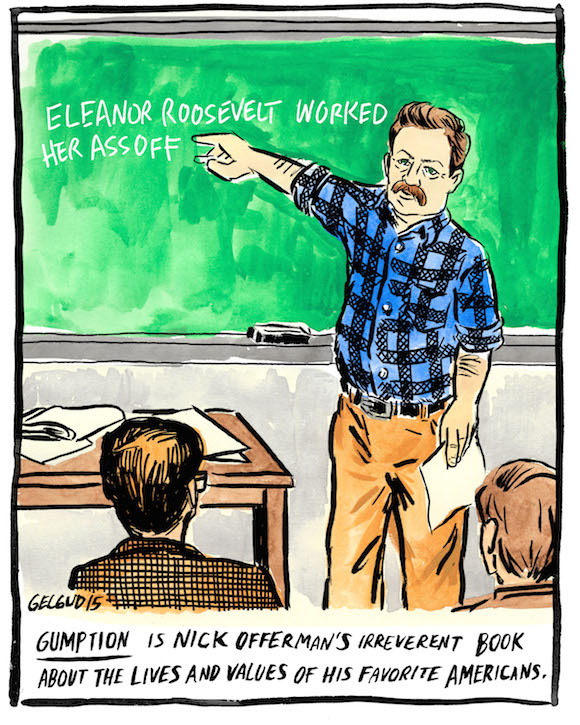 It’s also worth noting that, where possible, Offerman interviewed many of his subjects and so was able to ask them questions he felt would be relevant to the book. Offerman is also wise enough to recognise that whilst these people may be great, they are still human beings. They’re not perfect. In some of his subjects, in particular the ones alive over a hundred years ago, Offerman doesn’t shy away from any opinions or deeds they may have had or enacted upon during their careers that wouldn’t slide today. It’s clear Offerman admires these people, but he doesn’t follow them blindly.

Given Offerman’s deep, caressing voice, I opted to digest this book in audio form as I romped across rolling hills and through dense forests. I feel Offerman would’ve approved of this and I would certainly recommend it. I’d highly recommend this book to any fans of Offerman’s and to anyone who s curious about notable American figures. It’s enough to give you a nice knowledge on each figure, but never feels dense or dry.

Nick Offerman has a new book coming out on November 7 called Good Clean Fun: Misadventures in Sawdust at Offerman Woodshop. I’ll be sure to review it.