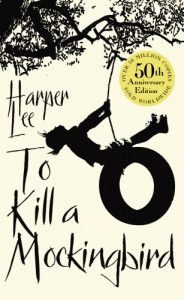 Despite the fact I’ve owned a copy of To Kill a Mockingbird for years, and despite the fact that it’s one of the most famous and influential novels to come out of the United States, I confess that it took me years to finally get around to reading one of the most well-regarded modern classics of all time. I have to admit that I wasn’t sure it could live up to my expectations. I’ve heard people discuss this novel countless times over the years, and it always makes the top ten in lists that present the greatest books of all time. Can a book so revered possibly live up to its reputation? Over-hyping anything is the fastest way to make it a disappointment and I hate that feeling of being underwhelmed by something everyone else raves about. So, does To Kill a Mockingbird deserve its high standing? In my opinion, it certainly does.

I really can’t blame anyone who approaches this book with some skepticism. Like me, they may be suspicious of anything that receives such lavish amount of praise and, like me, they might also wonder if a book about racism that was published in 1960 (and is set in the 1930s) is still as relevant in the 21st century. I mean, we’re far more inclusive nowadays than we were in the early 20th century, right guys?

,The book’s premise is heavily inspired by author Harper Lee’s own childhood growing up in a small town in Alabama in the 1930’s, particularly one event, when a white woman accused a black man of raping her. The novel follows a girl, nicknamed Scout, and her older brother Jem as they grow up in the fictional town of Maycomb during the Great Depression. Despite growing up during such a troubled time in America, the two children enjoy a peaceful childhood and gentle rearing from their father, Atticus, a lawyer, who’s easygoing nature doesn’t prevent him from imparting his strong sense of justice and morality upon his two children.

Atticus, and by extension his children, soon find themselves at the center of a controversy when he takes on a case which sees him defending a black man who has been accused of raping a young white woman. While most of the town are eager to see the man lynched, Atticus fights to try and convince the all white jury to look past their intolerance and realise the truth of the man’s innocence. These events are witnessed from the point of Scout and Jem as they become aware of the true complexity of the world, their town’s bigotry, and the social boundaries that have been erected by white and black people.

To Kill a Mockingbird may primarily focus on themes of racism and intolerance but, dig a little deeper, and you’ll soon discover wise meditations on issues including class, gender roles, justice, compassion, courage, law, and the loss of innocence. To try and say the novel only tackles the subject of race would be selling it short. Despite its intense themes and adult subject matter, I was surprised to find that there is still a great deal of warmth to be found from Lee’s book. Don’t be mistaken, Lee makes no attempts at sugar-coating the serious realities this book explores, but she explores them in a way that acknowledged the charm and humour found in humanity, as well as its darkness. Each character feels expertly realised and it wasn’t long before I soon felt like a local of Maycomb myself, and I became fond of its often eccentric inhabitants. Lee was able to make me feel the same love and empathy for them that Atticus feels, even when they’re clearly on the wrong side of history. For all its hard to stomach truths, To Kill a Mockingbird was not an experience that left me despising humanity, even though it highlights how despicable we can be.

As interesting as I found many of the characters to be, it’s easily the Finch family that steals the show, along with their stern but caring, black housekeeper Calpurnia. Atticus is not the sort of father society expected during that era (he’s much better), but his love and understanding for his children makes him the sort of role model any decent parent should aspire to be. My fondness for the Finch family grew to such an extent that I became increasingly anxious that something terrible might befall them as tensions over the trial increased.

Harper’s decision to explore the very adult themes the book deals with through the eyes of children is a sure sign of her skill as a storyteller. Scout and Jem are too young and innocent to bear the prejudices society places on adults and they’re unafraid to speak from their hearts. They say wisdom often comes from the mouth of babes and Scout and Jem show more compassion and understanding than many of their adult neighbours. While we see many intense encounters via the two children, we also get to join in with many of their games and jokes, giving the reader a nice reprieve from the more tense parts of the book.

As if it isn’t obvious by now, To Kill a Mockingbird is a book I would highly recommend. In fact, I can’t think of anyone I wouldn’t recommend this book to. I’ve found myself reflecting on it numerous times since I finished it and it serves as an excellent reminder that, no matter how frustrated or angry we become with other people, no matter how cut and dry an issue may appear to our eyes, it’s always worth taking a moment to step back and to try and see things from other people’s perspectives. As I’ve said, this book explores many different themes, but I found its overriding message to be that of empathy.

You may be aware that, every few years or so, the news will report that some parents or teachers from one school or another will protest it being taught in schools due to its adult subject matter and the fact it includes racial slurs. While I appreciate these parents and teachers are trying to look out for their children, I can’t help but feel they may have missed the mark. A book that explores racism in the deep South in the early 20th century would feel completely disingenuous were it to sugar-coat the reality of racism and shirk away from using language that people had to endure on a daily basis (and some still do today). I wish I’d read this book when I was in school, and I think it will help many teenagers of all races and backgrounds to be more accepting of one another. Human history is often ugly, embarrassing, and difficult to look back on, but the way we evolve as a species is to learn from our mistakes, not try to pretend they never happened. In short, To Kill a Mockingbird is more than just a book, it’s a gift, a gift we should cherish and pass along to future generations.