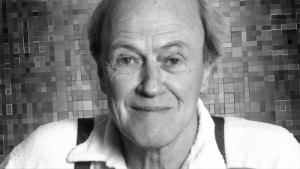 September 13, 2016 marks the 100th anniversary of the birth of Roald Dahl. Dahl is arguably the most popular children’s author of all time. His most famous works include Charlie and the Chocolate Factory, Matilda, The BFG, and Fantastic Mr. Fox. His books have been adapted countless times to other forms of media and his popularity has only grown over the years.

Dahl passed away in 1990 at the age of 74, but crikey did he pack a lot into his life. Did you know that Charlie and the Chocolate Factory was inspired by the fact that Cadbury used to test new chocolate bars by sending them to his school. His english teacher also wrote in his school report: “I have never met anybody who so persistently writes words meaning the exact opposite of what is intended.”

Dahl also fought in World War II and saw combat in Africa and Greece. He shot down several enemy fighters, survived a plane crash that left him temporarily blind, and gained the status of a “Flying Ace”.

Dahl’s first children’s book was called The Gremlins whilst working in America as a British Ambassador. It was inspired by RAF folklore which blames “Gremlins” for any trouble with the planes. He sent a copy to Eleanor Roosevelt who read it to her grandchildren.

Over the course of his life, Dahl produced some of the best books a child could ask for and also worked on some more adult stories you should check out. In 1986, Dahl was offered an OBE but turned it down. It has since been rumoured he would’ve preferred a knighthood. After dying of a blood disease at the age of 74, Dahl was buried in Oxford with several items including some good burgundy wine, chocolates, and pencils.

Happy birthday and thanks for all the stories!