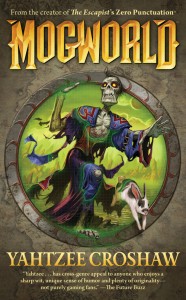 After reviewing classic books like East of Eden and On the Road I figured I ought to go for something a little more fringe. Mogworld is a humorous fantasy novel by the hugely popular online video games reviewer, Ben “Yahtzee” Croshaw. Yahtzee is known for his incredibly funny. cynical, and fast paced games reviews in which he all but destroys the latest game release regardless of whether everyone else likes it. I’ve been a viewer of his for sometime and when I discovered he had written a novel I thought it apt to pick up a copy and give it a read.

Mogworld tells the story of Jim, a recently resurrected Zombie who wants nothing more than to end his own life…well death….well un-death… Oh you know what I mean! Unfortunately for Jim this is harder than usual since he’s technically already dead, and despite throwing himself off tall towers he is unable to return to the paradise from which he was resurrected. Upon awakening, Jim discovers that the land has been gripped by a curious phenomena which means no one is able to die. From here Jim gets himself tangled up in an epic quest that threatens to destroy the entire word. At this point I should probably mention that Mogworld includes a twist which is revealed pretty early on and is in fact spoiled on Mogworld’s description page on Amazon but for the purists out there I won’t reveal anything here. Lets just say that there’s slightly more going on than meets the eye. 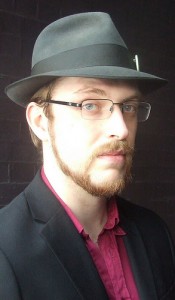 Mogworld pokes fun and spoofs many of the conventions found in modern fantasy and gaming, in particular MMO’s (Massive Multiplayer Online) like World of Warcraft. Rather than focusing on a brave knight, off to slay fearsome Dragons and save buxom princesses, Mogworld instead focuses on an un-dead, unskilled Mage called Jim. Unlike many fantasy protagonists, Jim is completely unconcerned by anything other than himself and simply wants to die (again). If I had to describe Jim in word then that word would be dick. Jim is a dickhead but he’s also funny, unpretentious and representative of many of the thoughts that go through our head. He may be a zombie in a fantasy word but there’s something very relatable about him. During his adventure Jim encounters many other characters including the clingy but lovable Meryl, the incompetent and cool Slippery John and the evil but hilarious Lord Dreadgrave.

As I mentioned earlier, Mogworld is very humorous in its style.  Fans of Douglas Adams and Terry Pratchett will feel right at home here and of course Yahtzee’s online audience will get a kick out of it. I’ve always thought comedy is harder to convey in the written form since you can’t rely on comedic timing or physical expressions but more than once I found myself laughing out loud. The humour flows effortlessly throughout the novel and it can be appreciated by young teens to adults.

A small criticism I have of Mogworld is that it lags a little in the middle. That’s not to say that I found the half way point unenjoyable but the beginning and end are so damn strong that I couldn’t help notice the middle act could have had a little fat rimmed off. Regardless, Mogworld is well worth a read particularly if, like me, you’re a fantasy nerd who plays too many video games.