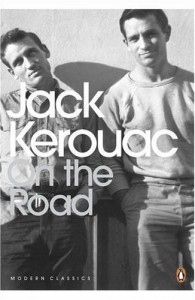 I think almost every one, at some point or another has fantasised about escaping the dull routine of everyday life and setting off on an adventure spanning thousands of miles. I know I’ve certainly put real thought into just getting in my car and driving as far away as possible. These thoughts are usually quelled when I remember I need to sort my emails or feed the dog but for some, the urge to travel is too much to ignore and their wanderlust takes over as they travel mile after mile into the unknown. This is what Jack Kerouac’s On the Road is all about.

Based upon the travels of Kerouac and his pal Neil Cassady, On the Road tells the story of Sal Paradise (Kerouac) and his free-spirited, carefree buddy Dean Moriarty (Cassady) as they travel across North America. Along the way Sal contemplates the meaning of life, religion, freedom, maturity and identity. 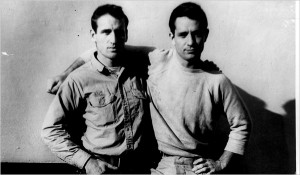 Jack Kerouac, right, with his friend and road companion Neal Cassady in 1952.

One of the main themes of On the Road is Sal’s hero worship towards Dean. Sal is philosophical and struggles with much internal conflict. In Dean he sees something he wants to aspire to. Dean embodies the romance associated with life on the road. He’s care free, wild and sexy. Even when he realises Dean can be selfish and highly irresponsible the connection between the two men is still unbroken and, even when they go their separate ways, they always seem to wind up together whether they mean to or not.

For me, On the Road is about escaping. Sal wants to try and outrun maturity and growing up whilst Dean can’t stay in one place long before trouble finds him in one form or another. The problem with running away from internal conflict is that there’s nowhere you can actually escape to. The two men exist in a kind of half life where they are constantly traveling onwards without a starting point or a destination. This is most apparent when the pair reach the coast and become anxious at the fact there’s no more road to travel upon.

On the Road is often considered the defining work of the Beat generation as Kerouac himself is arguably the face of that movement. Beat is perhaps a precursor to the Swinging Sixties, as it came to prominence during the 50’s. The movement included drugs, free love, rejection of taboo’s, rejection of materialistic values and interest in Eastern religion. This slow but steady shift in American society is the back drop to On the Road and it’s interesting to try and identify the characters who are simply ahead of their time and the others who are using any excuse to get high and fuck each others brains out.

The most interesting character by far is the anti-hero Dean Moriarty. On the one hand Dean represents a constant enthusiasm and lust for life that infects everyone around him and breathes fresh life into the world. On the other hand he takes no responsibility for the children he sires during one night stands, is unfaithful to every woman he’s with and will abandon his friends without guilt or remorse if it suits his own needs. At certain points in the book you’ll find yourself wishing you knew Moriarty and at others you’ll be glad you didn’t. There were times I considered Dean to be a free spirit who couldn’t help but do what he does and at others I just thought he was a dick. Sometimes I even wondered if he was just mad. Even after finishing the book I still can’t decide which is most accurate. I guess that’s the undeniable charm of Dean though. He’s impossible to pin down. You can’t really love him but you can’t hate him either. One of my favourite quotes from the book describes him perfectly:

“the only people for me are the mad ones, the ones who are mad to live, mad to talk, mad to be saved, desirous of everything at the same time, the ones who never yawn or say a commonplace thing, but burn, burn, burn like fabulous yellow roman candles exploding like spiders across the stars.”

After finishing a nights reading of On the Road I found myself wanting nothing more than to get in my car, jump on the next train or grab my passport and head for the nearest airport. The wanderers among you will identify greatly with this book whilst the less adventurous readers might find this to be the inspiration they need to go hit the road.