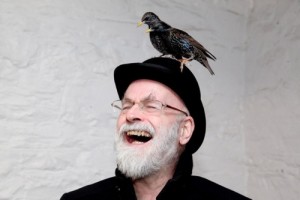 On the Thursday of last week, the news broke that Sir Terry Pratchett had died peacefully in his home after battling Alzheimer’s for over eight years. His publisher stated that Pratchett died at home “with his cat sleeping on his bed, surrounded by his family”.

Pratchett is most well known for his Discworld novels, of which he wrote over forty! Numerous generations of readers have grown up reading his books and his loss will be felt by millions of people across the world.

Pratchet was knighted in 2009 for “services to literature” and was the second most read author of the 00’s, coming second to JK Rowling. He may be physically gone but he will live on forever in his books, which will be enjoyed by millions of new readers in the centuries to come. Farewell Sir Terry, we’ll miss you terribly.

AT LAST, SIR TERRY, WE MUST WALK TOGETHER.

Terry took Death’s arm and followed him through the doors and on to the black desert under the endless night.
— Terry Pratchett (@terryandrob) March 12, 2015

If you would like to honour his memory, why not donate a few quid to Dementia UK, and help fight this terrible disease.