↓
Home Menu ↓
Skip to primary content
Skip to secondary content
Home→Books→Machine of Death: A Collection of Short Stories About People Who Know How They Will Die – Ryan North, Matthew Bennardo, and David Malki 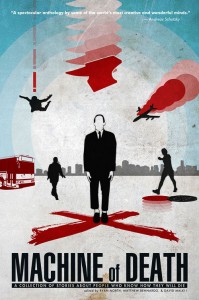 In 2005, a man named Ryan North came up with the premise of a book which would tell stories about a world where people knew how they were going to die. In this world there existed a machine called the Machine of Death and it could tell you how you were going to die just from a drop of your blood. After sampling your blood the machine would then spit out a small piece of paper which has your fate written on it. He posted this idea on a webcomic of his called Dinosaur Comics where he soon started getting hundreds of stories sent to him by writers from across the globe.

The Machine of Death may sound like a great invention but unfortunately it has two flaws. One, it is very vague and only gives results such as Drowning, Suicide, Heart Attack, or Old Age. Two, the machine seems to have a strange kind of humour. An obvious result such as Old Age could mean you die in your sleep aged 100 or you could get shot by a pensioner on your 30th birthday. Someone who gets Suicide might kill themselves or be killed by a suicide bomber. Whatever your result is you can only be sure of one thing, the machine is ALWAYS right.

After receiving so many stories, Ryan North, Matthew Bennardo, and David Malki selected the best submissions and published them in this book. I first heard of the book because Mogworld Author Ben “Yahtzee” Croshaw submitted a short story which made the final cut. I was so intrigued by the premise I bought a copy right away and was not disappointed. Each short story is named after the cause of death the story centers around and so you have stories called Torn Apart and Devoured by Lions, Exploded, or Improperly Prepared Blowfish. As you can see some of these seem pretty straight forward but others have hugely intriguing titles like Heat Death of the Universe, Not Waving But Drowning, or ?. Yahtzee’s was called Exhaustion From Having Sex With a Minor in case you were wondering. 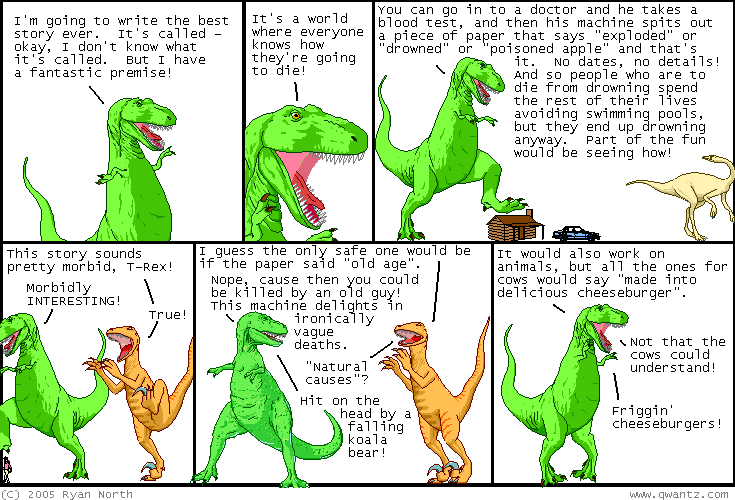 What makes this premise so compelling is the fact that the result the machine gives you will always come true no matter what. You can do everything in your power to escape your fate but sooner or later it will find you. The stories also touch on what sort of effect a device like this would have on the world and society if it did really exist. Would there be prejudice against certain deaths? Would airlines hire pilots who are destined to die in a plane crash? Should we arrest people who get results like Electric Chair or Exhaustion From Having Sex With a Minor? What would you do if your result said your best friend was going to kill you? Are they secretly psychopaths or will they be the one to take you off life support when you’ve been in a coma for years? Should world leaders have to make their cause of death public and what’s the point in doctors who can’t save patients who are either going to die of whatever is wrong with them or know they will survive it? As you can see, the machine brings up so many questions which are explored throughout the book and you’ll find yourself thinking about the concept long after you’ve finished reading.

Despite being all about death, the book isn’t all gloom and doom. Sure, some stories are pretty intense but some will leave you feeling optimistic about both life and death whilst others touch on some of the best qualities humanity has to offer. Like the machine itself, all the stories have a dark sense of humour whether it’s the irony of some stories or the downright bizarre deaths of others that  delivers a certain black comedy that will certainly strike a chord with readers.

A mark of a good book is surely how long it stays with you. Sometimes a book will leave my brain as soon as I finish the last page but other times it will stay with me for years, even forever. I think Machine of Death is certainly a book that will stay with me for a long time. Not only is the book well written but it also has so many philosophical, spiritual, and moral questions to keep you awake at night. I’ve always been a bit of a geek when it comes to these sorts of big questions and I greatly enjoyed exploring these themes. After reading just the first few stories I wanted to give a copy to all my friends, force them to read it right away and then have them all tell me what they thought of it. It’s the sort of book you want to give to your friends and family for their birthday or Christmas. I hope I haven’t put some people off with my ramblings of philosophy and such, this is a book you can read on holiday or on the bus but if you do want to dig deeper it does have the substance to do so.

Machine of Death is a book that was self published and created and contributed to by people who clearly cared about the project rather than making a quick buck, and boy does it show. The book is published under Creative Commons Attribution–Noncommercial–Share Alike 3.0 license which means that you can pretty much do whatever the hell you want with it without fear of being sued. The editors openly encourage you to: “Share, email, upload, download, seed and torrent [this] entire book…and please do!” All that is asked is that each short story is credited to its author. Personally I bought my copy but you can go to machineofdeath.net/about/books and download a complete PDF file of the book totally free. I urge you to support the book by buying it but if you’re strapped for cash then fair enough. You can also listen to a podcast of each author reading their short story, free of course.

Not only is Machine of Death one of the most entertaining books I’ve read but I also wholeheartedly respect and wish to support the creators. This is a rare book written by rare people and I urge you to go out and get a copy. This book deserves to be read and with any luck word of mouth will one day turn it into a modern classic. If you do have the cash to spare then I hope you support the creators by buying a copy, it’s worth every penny. This is a book unlike anything I’ve read before and I hope you check it out.

A follow up book called This Is How You Die has also been released.