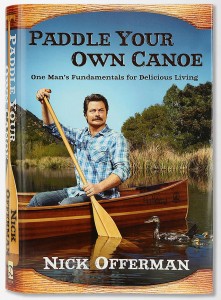 Paddle Your Own Canoe is half a memoir and half a guide to life by actor and comedian Nick Offerman, who is best known for his portrayal of Ron Swanson in the American comedy, Parks and Recreation. No doubt most TV watching Americans will already be familiar with the show but since it’s not shown as much overseas, you could forgive someone outside the US for not having seen it. If you haven’t seen Parks and Recreation yet then stop reading this and go watch it now! You won’t be disappointed.

One of the main characters in the show is the mustache sporting, man’s man, Ron Swanson who is portrayed by Nick Offerman. Whilst Offerman isn’t quite as gruff and no-nonsense as Swanson, he has put a lot of himself into his character and if the two were to meet, the chances are they’d have a lot to talk about over a good whiskey and a rare steak. In his book, Paddle Your Own Canoe: One Man’s Fundamentals for Delicious Living, Offerman writes half about his life and half about his philosophies on good living. The result is a humorous read that will no doubt entertain Swanson fans and comedy fans in general.

The biographic parts of the book start from Offerman’s idyllic upbringing reminiscent of Little House on the Prairie and spans his early life and acting career up until he got the part of Ron Swanson. Many autobiographies can be dull to read but Offerman has plenty of amusing anecdotes that will keep you laughing and engaged. In his early adult life he had plenty of small adventures, one of which resulted with a gun being put to his head…by a cop. I won’t spoil that tale here but safe to say he certainly hadn’t done anything to warrant that.

Offerman’s book gives a great insight into what it’s like being a young adult trying to get jobs in the acting business, but most importantly, I thought it gave excellent advice on how to handle such a lifestyle. I’ve no interest in acting myself but there are millions of people out there aching with every atom of their being to get a break and make it big. To these people I would especially recommend this book as Offerman has a lot of sage advice on how to pursue an acting career without becoming a vain, depressed, desperate asshole who cares only about acing their next audition. It’s refreshing to see someone in the media go to such lengths to stress the importance of happiness in yourself and your everyday life rather than looking for it in fame, money and success.

The other aspect of the book deals with Offerman’s opinions on life and how one should live it. Describing Offerman simply as a man’s man who loves red meat and woodworking would be falling short of capturing the whole picture. Underneath the manly exterior, thick mustache and dry humour is a man who clearly has some deep thoughts and an intense love for his friends and family. Some of the best chapters are those that focus on those Offerman keeps close and it was nice to read someone expressing such a joy and devotion to the free things in life such as friends, family, nature, and humour, rather than celebrity status, awards and recognition. Offerman makes it clear he loves doing what he does but if his career dried up tomorrow I don’t think he’d care as long as his wood-shop and friends were still around.

Speaking of family, Offerman is married to actress Megan Mullaly and it seems the two may just be the happiest couple ever. Reading how much Offerman adores her and how much she seems to adore him warmed even my fossilized heart. Offerman makes no apologies for the sappy words he writes about his wife and nor should he, it’s refreshing. He recalls their relationship from the first time they met, to the beginning of their romance and right up to the present day which sees them being married for over a decade. Mullaly also seems to have a sense of humour that surpasses even Offerman’s and not only will you be feeling all loved up during chapters centered around her but you’ll also be snorting with laughter.

I’d highly recommend this book to fans of comedy and It’s pretty much a must buy for those who are Offerman/Swanson fans. At this point I must do something I never usually would do and that is recommend you check out the audiobook version. Don’t get me wrong, books are written to be READ but the audiobook is read by Offerman himself and is, most importantly, unabridged. Fans will love hearing Offerman’s rich voice recounting tales from his youth and I also felt that he really compliments the humour. You can tell he had a good time recording the book and it’s an added bonus to hear him chuckle at anecdotes about his youth or hear the passion in his voice as he reads a chapter dedicated to something (or someone) he loves. I’ll leave it up to you to decide on which version you pick up but if you’ve got a long journey in the near future then you could do a lot worse than putting this on your ipod.

Reading this has also made me realise how brilliant it would be if Offerman worked with the creators of Parks and Rec to create a Ron Swanson biography. How great would it be to read about his early childhood working in a factory (and becoming manager after a week) or reading about his crazy ex-wives? Get on it Nick!

You can catch Parks and Recreation on NBC but, whatever you do, paddle your own canoe.