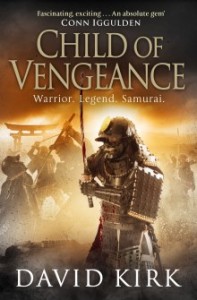 A few weeks ago I was at my local Tesco super store when I came across the book section. Usually I don’t bother looking at books at these kind of places because all they ever sell is the latest Twilight, the latest Dan Brown novel and a thousand copies of 50 Shades of Grey positioned suspiciously near the AA batteries…

Anyway, after seeing they were having a sale I decided to have look in the vain hope there might be something interesting. To my surprise, there was. I was looking at the cook books when I came across a new novel I’d not heard of, Child of Vengeance by David Kirk. The front cover pictured a bloodied Samurai standing against a war torn backdrop and, upon reading the blurb, it seemed the book was a historical novel partly based upon real characters and events. Ever since I was a child I’ve always had an interest in the Samurai and before then I’d never encountered a novel based on them. I looked at some of the praise quotes on the first page and noticed one from one of my favourite authors, Steven Pressfield. He was quoted saying “Mr Kirk restores my faith in historical fiction to bring lost worlds to life. Bravo! The keenest and most vivid evocation of the inner life of the East since James Clavell’s Shogun” The Samurai theme alone caught my attention and upon seeing one of my favourite authors praising I decided it was a must buy. I also rescued a copy of The Divine Comedy that was sat alone on the shelf, crammed in between two copies of 50 Shades of Grey. What’s wrong with people?

As I read through Child of Vengeance I realised that, after a few months of only reading classics, I had to cut it some slack. This is young Mr Kirk’s first book and very few writers create a masterpiece on their first go. Having said that however, Child of Vengeance is still a damn fun romp through feudal Japan that never lets up. Perhaps the most important aspect of a book is that it never gets boring and I can safely say that Child of Vengeance never gets anywhere near boring.

The novel centers around a young Samurai boy called Bennosuke who’s mother died when he was young and his Samurai father has been absent for most of his life. Instead he’s raised by his monk uncle who urges him to decline a life of violence and embrace one of peace and thought. As he enters adolescence, Bennosuke’s father returns and he is forced to choose between a life of honour and violence or humility and peace. From here a great tale unfolds as Bennosuke experiences the discipline, violence and brutality of what it means to be a Samurai. That’s pretty much the outset of the book and I won’t go into anymore detail to avoid spoiling it for you. 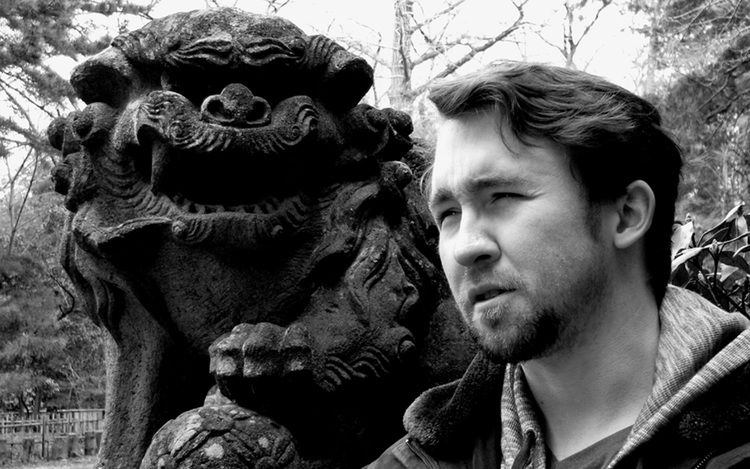 Kirk’s characterization is always solid although some characters are better than others. In my opinion, Munisai, Bennosuke’s father, steals the show and Kirk does a fine job of fleshing him out. The first time we meet Munisai, he is in charge of overseeing the Seppuku of a child. Seppuku was an act where you were given a short Samurai sword called a Tanto and had to disembowel yourself without making a noise. Once your guts were on the floor another Samurai would behead you. This was a form of punishment given to Samurai who had committed a serious crime or who wanted to regain their honour. The theory is that if a Samurai did all this correctly then he would redeem himself and wipe away the shame he’d brought on his family. Just so we’re clear then, the first time we meet Munisai, he beheads a child who’s just been forced to disembowel himself for something his dead daddy did. You’d think that it would be pretty hard to make Munisai anything but a villain after that but you’d be wrong. Munisai doesn’t WANT to behead a kid, he’s simply bound to a code of honour that dictates he must. To do anything else would be unthinkable and dishonourable not just to himself but to the child he slew. Kirk is great at presenting us with the often brutal codes the Samurai lived and died by without passing judgment or scorn.

It’s clear that Kirk knows what’s what when it comes to Japanese history and the Samurai. Although the novel is fictional it includes places, people and events who really did exist and by the end of the book I’d certainly learned a thing or two. Including why Samurai sheathed their swords with the blade facing upwards (much to the misfortune of one particular character). The novel also goes into detail on not just the fighting but also the way of life for a Samurai. It seems strange but these ruthless warriors also observed ancient traditions and customs even whilst doing something as mundane as pouring tea or as violent as killing a man.

If you’re interested in Japanese history, the Samurai or historic novels in general I would highly recommend this book. Although it’s night quite on a par with the likes of Steven Pressfield or Mary Renault, I think Kirk certainly has potential and should feel proud to have written a book that not only centres around a very complex period of history but also delivers fully fleshed out relatable characters, some of whom you’ll hate to love or love to hate.

Child of Vengeance is the first book in the Musashi series. The next book Hours of the Dog is due for release in Spring/Summer 2014.I’m looking forward to it.