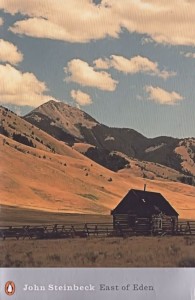 The first Steinbeck book I ever read was Of Mice and Men. I was about twelve when my older sister (who’s high school class were studying the novel) recommended it to me. She leant me her copy and I started it that night. I think it says a lot about Steinbeck’s talent as a writer that Of Mice and Men managed to engross the attention and imagination of a twelve year old English boy who’d never been to America, let alone California, and had never even heard of the Depression before picking up that book. Safe to say Of Mice and Men knocked me on my ass and after that Steinbeck became one of my top tier authors. I was more than happy to read it through numerous times when I entered high school and learning about the Depression and reading Grapes of Wrath only solidified my respect for Steinbeck. Eventually I moved on to other authors and other genres but Of Mice and Men always had a special place in my heart.

I admit that I felt a little trepidation when earlier this month I started East of Eden. I bought the book several years ago but just never really got round to it. So many books, so little time. As I was about to start the first chapter I realised I was a bit anxious. It had been almost a decade since I first fell in love with Of Mice and Men. What if I’d only been impressed due to my age and lack of experience? What if, upon revisiting the Salinas Valley, I discovered it wasn’t quite as good as I recalled? This wasn’t just any Steinbeck novel either, this was what he considered his magnum opus, his greatest novel. He once said that everything he’d written had been in practise for this. No pressure then…

Within a couple of chapters I knew East of Eden was something special. In the first chapter Steinbeck goes to great lengths to describe every detail of the Salinas Valley. It’s clear he wants to give the reader a clear image in their minds eye. Starting this novel made me feel as though I was coming home to a place I hadn’t been in a very long time. To this day I’ve still never been to the Salinas Valley and yet in my mind I feel like I know it as well as someone who lived their whole life there. It was like slipping on a comfy old pair of slippers after a long day. To my mind the Salinas Valley is just as much a character as any of Steinbeck’s human characters and revisiting it again was like seeing an old friend.

East of Eden is in no way lacking ambition. The story spans over three generations as it tells the story of two families called the Trask’s and the Hamilton’s, who intertwine as each generation mirrors the biblical story of Cain and Abel. East of Eden tackles some massive subjects, mainly the question of good and evil and the cross we all bear as we try to balance the two. Do we have free will or do the sins of our forefathers doom us from the start? One of East of Eden’s strongest points is its characters and the connection you make with them. Spanning over three generations you’ll meet a lot of characters along the way each of whom is battling their own demons. Some conquer them but some aren’t so lucky. I don’t think there was a single character I didn’t care about in some way or another. Some are instantly likeable like the humble but wise Sam Hamilton and his equally wise friend Lee. Others may not be likable but I still couldn’t help but pity them. For instance the psychopath Cathy represents the constant evil in the world and despite her hate and lack of conscience I still had sympathy for her. 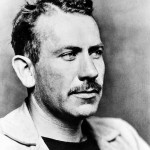 The great thing about East of Eden is that due to its long time span you get to know a characters from their birth right up to their death. It’s fascinating to see the inner turmoil of the child and how it effects him or her as they become an adult. Nobody wants to grow up to be bitter and twisted and yet people do. Perhaps we should pity them or is it their own doing? Did they choose it or was it their destiny? If you enjoy a bit of philosophy you’ll certainly get a kick out of this. Steinbeck has written some really profound stuff here and you’ll find yourself pondering over them long after the final page. Upon finishing East of Eden I really wish I could talk with Steinbeck in depth and discuss the themes and ideas behind this book.

For all its philosophy and impossible questions East of Eden never felt hard to read. Steinbeck finds away of presenting the reader with huge ideas and delivers them concisely and clearly so the reader understands exactly what he means. That said though, Steinbeck never presents his word as law. I felt encouraged to draw my own conclusions and form my own opinion based on the information he gives. In this Steinbeck is unbiased and you get the sense he’s not judging any of the characters or condemning them. Right now I envy Steinbeck’s ability to present big concepts clearly because writing this is proving difficult without drowning you in a stream of conscious about all the things East of Eden made me feel.

I was surprised to find that East of Eden is quite different to Steinbeck’s other novels in that it’s not as gritty or dark as the likes of Grapes of Wrath or Of Mice and Men. Of course bad things happen to people who don’t deserve it and at times the bad triumphs over the good but in the end East of Eden ends on a ray of hope. We humans may not be perfect, but at least we’re trying.