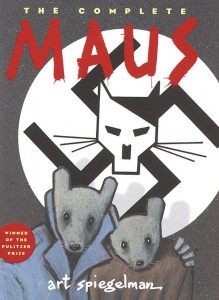 The Independent said of Maus: “One of the clichés about the Holocaust is that you can’t imagine it – like nuclear war, its horror outfaces the artistic imagination. Spiegelman disproves this theory”. Before reading Maus, I admit I couldn’t imagine it. Despite two years studying German history during WWII, and of course studying the Holocaust, I could never really get my head around it. I’d seen films like Shindler’s List, watched documentaries, seen horrific pictures of Auschwitz and been to an exhibition about the Holocaust at the Imperial War Museum. I knew it happened but there was something stopping me from feeling it had happened. Being a young man born in the early 90’s, WWII seems such a long time ago to me. As a privileged westerner, who’s never experienced even an iota of the horrors of the Holocaust, I found it hard to form a genuine emotional response. It wasn’t that I didn’t care, I was disgusted, but I just couldn’t quite comprehend the reality of such a slaughter. Trying to imagine the pain of six million prisoners is impossible. It took reading about the pain and horror inflicted upon one man to comprehend such an event. Finally, after finishing Maus I get it now. I understand the complex and almost infinite consequences that not only destroyed the lives of six million human beings, but the evil that was passed down for generations to come. The first half of Maus is called “My Father Bleeds History” and I guess we all do. Some more than others.

Maus is by no means a pleasant book to read. Seeing the brutality of the Holocaust page after page is in no way going to improve you’re mood, and I often went to bed that night with my head full of thoughts. Mainly centring around how brutal and cruel we humans are capable of being. That said however, I don’t regret a single page and I feel I have a better understanding of The Holocaust because of it. Of course reading Maus isn’t going to give you the same understanding as someone who actually experienced the Nazi death camps but, it gives you a clearer picture of the suffering those people had to endure before they even arrived at the concentration camps. Before reading Maus I considered the camps to be the real horror of the Holocaust. There’s no doubt that the conditions prisoners were kept in were horrific but, what is the pain of starvation and beatings compared to the pain of a mother being separated from her children, knowing full well she may never see them again? What’s disease and death compared to being powerless as your human rights are slowly stripped from you while you live in terror and pray to God just to see another day? Maus taught me how the suffering of the Jews (and other targets of the Nazi’s) started long before they were sent to Death Camps and certainly didn’t end when they were freed by the allies.

Reading Maus, I was struck by how the Holocaust tainted the lives of those who weren’t even alive when it happened. Maus is written by Art Spiegelman, whose mother and father are both Auschwitz survivors who lost their first son in the Holocaust. Art was born in 1948, three years after the end of WW2 and yet still the Holocaust has scarred his life. His mother committed suicide in 1968, he has an estranged relationship with his father who is somewhat difficult due to his experiences and, he feels he can never live up to the memory of his brother. Art’s life is fucked up by the Holocaust despite not even being alive at the time. The effects of the Holocaust aren’t just felt in those who lived through it but also by generations to come.

Boldly perhaps, Art Spiegelman chose to tell his parents story in the form of a graphic novel. Some people might argue that presenting the Holocaust in what is essentially a comic might add a disrespectful layer of cartoony-ness over a brutal and heart breaking story. Before reading Maus I may have agreed, but upon finishing it I think the graphic novel approach is perfect. Drawn in black and white, Art has depicted the story in a simply style that somehow adds to the brutality and doesn’t distract the reader with bright colours or in your face text. Another touch of brilliant is the depiction of each “faction” involved with the plot. The Jews are mice, the Nazi’s are cats, the Polish are pigs, the French are frogs and the allies are Dogs. Some critics have argued that depicting each race as a different animal only adheres to the Nazi stereotyping but to my mind it’s a touch of genius. By depicting each group as animals you get a clear sense of where each faction stands in the food chain. The mice live in terror of the cats whilst the pigs and cats have an uneasy truce, whilst the cats fear the dogs. It amplifies the idea that during WW2 the world became a more savage place where people began to revert to more animalistic and brutal ways of living.

I can’t tell you Maus is a good read, because it’s not. It’s unflinching depiction of one mans struggle to survive will leave you feeling depressed, angry, guilty and hopeless. It is however one of the most compelling books I’ve ever read and certainly the best graphic novel I’ve read. It’s the best source on the Holocaust I’ve encountered and I believe it should be required reading for students learning about WW2 and the Holocaust. I don’t think anyone who reads Maus will finish it without taking something away from the experience. This is a must read for everyone.