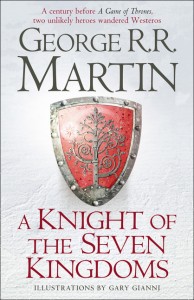 Set roughly one-hundred years before the events of A Game of Thrones, the first installment in George R.R. Martin’s epic fantasy series A Song of Ice and Fire, A knight of the Seven Kingdoms tells the story of a young knight named Duncan the Tall, and his squire, Egg. The three short stories take place in the continent of Westeros, but decades before Robert’s Rebellion or the birth of Tyrion Lannister.

A Knight of the Seven Kingdoms is a collection of three short stories written by Martin alongside the main Song of Ice and Fire books. The collection includes The Hedge Knight (1998), The Sworn Sword (2003), and The Mystery Knight (2010). These were published before the Game of Thrones mania gripped the world and by the present day, it was incredibly hard to get hold of them, one was even out of print. Realising how badly fans wanted something to help tide themselves over until The Winds of Winter (and what a shit load of cash they’d make), Harper Voyager has combined the three short stories into one book, complete with beautiful illustrations by Gary Gianni. 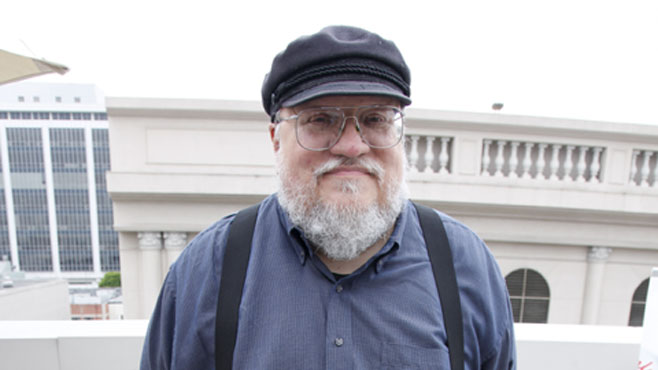 As I established earlier A Knight of the Seven Kingdoms follows the adventures of Dunk and his squire, Egg as they travel across Westeros. The first book tells how Ser Duncan meets his unlikely squire and the following two see Dunk and Egg taking part in events that will have long lasting effects on Westeros, effects which can be felt in the Song of Ice and Fire books. As you’d expect from a book by George R.R. Martin and being part of the fantasy world of Westeros, A Knight of the Seven Kingdoms features plenty of twists and turns and political intrigue as well as some action. There’s plenty to say about the plot of each book, but I don’t want to spoil anything for you. Game of Thrones spoilers are everywhere these days and even the book’s Amazon description page ruins one major plot point. If you think you want to read this then just go and buy it. Don’t look it up (except right now, in this spoiler free zone).

If you’ve read the Song of Ice and Fire books then you’ll be used to following great lords and ladies, famous knights and political figures. However, we’re not hanging out with the filthy rich Lannisters in these short stories, far from it. As a Hedge Knight, Dunk is pretty much as low as you can be whilst still having a title. Roaming the lands, seeking service from one lord to another, Hedge Knights are so poor they’re named after the fact they often have only a hedge to sleep under at night. After some reluctance, Dunk eventually takes Egg as his squire and begins training him in the ways of being a knight. As with any good fantasy book, the two get into several scrapes that involve many new characters, many of whom are just as memorable as the characters in the Song of Ice and Fire series.

One of the excellent illustrations by Gary Gianni.

Long-time fans of the series will get a kick out of meeting the ancestors of well known characters featured in A Song of Ice and Fire, and you may even spot a few characters who are alive in both, though much younger in these stories *Wink, wink. Nod, nod. Pay attention*. These novels also provide a greater insight into the Targaryens and will further enrich the world of Westeros for veteran readers who know their Jeor from their Jorah and their Sandor from their Sansa.

Seriously though, if you’re already a big fan of the TV show and the books and are yearning for The Winds of Winter, then you absolutely need to pick this up. Hell, you probably already have. If you’re a newcomer to the fantasy world of Game of Thrones then this is an excellent place to start and will ease you into the amazing but also daunting world of Westeros.

A page from The Hedge Knight graphic novel

Great work, George. Now publish The Winds of Winter before I piss myself.

If you enjoyed this, check out my review of The World of Ice and Fire.