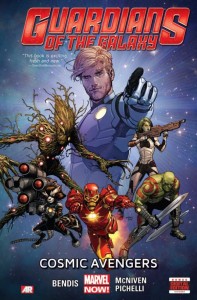 The other day I went to the cinema to see The Amazing Spider-man 2 (should’ve called it The Very Mediocre Spider-man 2 but maybe that’s not as pithy) and as always I sat for twenty minutes whilst the trailers for all the upcoming films were played out. Most of them were as forgettable as the film I was about to see but I found myself genuinely thrilled by one trailer that was advertising the upcoming release of a film called Guardians of the Galaxy.

The film appeared to be a mix of Firefly, The Avengers, and Doctor Who with a great cast including Chris Pratt (Parks and Recreation), Zoe Saldana (Avatar), Bradley Cooper (The Hangover Trilogy), Vin Diesel (Fast and Furious), and Karen Gillan (Doctor Who). I think what makes the film stand out is the fact that Marvel are taking a chance in producing a film based on a franchise that isn’t well known. We’d all heard of Spider-man and Iron-Man before their films came out, but I had never heard of Guardians of the Galaxy before I saw this trailer. Even though this is another film connected to the next Avengers phase, it’s good to see Marvel shaking things up and working with something fresh. I’m so tired of your A-list superheroes and I can’t wait to embrace something a little more fringe. When’s the last time you saw a Raccoon jump on top of a sentient tree and start firing a gun bigger than his little furry self? Safe to say the trailer got me feeling pumped for Guardians of the Galaxy and seeing as how it has been a while since I last read a comic or graphic novel, I decided to go out and get a Guardians comic and see what these guys are all about.

I feel I should point out I’m really not very up to date when it comes to comics or graphic novels. I’ve read some of the big mainstream ones like Watchmen, The Dark Knight Returns, and of course Maus, but I don’t buy all the latest comics and I’m not one of these people with an encyclopedic knowledge of every superhero and villain ever created by Marvel, DC, or whoever else. I have always thought that superheroes and comics were pretty cool but I always felt like there was a momentous amount of catching up to do since some of these heroes have been around since the 60’s, 50’s, and even 30’s. That said, I did spend a fair amount of my childhood watching the 90’s cartoons of Spider-man, the X-Men, and Batman, to have a pretty good understanding of the characters and the universes they resided in. As I said though, I’m not a comic expert and so this review should be taken from the perspective of a fairly average reader. If you’re a huge comic nerd (which is fine) don’t be surprised if I totally gloss over the significance of a character or plot device that dates back decades but is seemingly lost on me.

“What a bunch of A-holes”

I didn’t need to know the complete history of the Guardians so I had a quick look online to see which comics were recommended for newbies excited for the film, and bought a copy of it. The general consensus online was that Guardians of the Galaxy: Cosmic Avengers was a good start for newcomers as it featured the now hugely famous Tony Stark AKA Iron-Man and had a fairly straightforward and self contained story that gave you a good flavour of the Guardians. Perfect.

It seems the Guardians comics take place in the same universe as the Marvel one (Spider-man, X-Men, Avengers etc) except that the Guardians are all aliens from outer space who have come together to protect earth from powers that could destroy it. Our main hero and leader of the Guardians is the Han Solo-eque Peter Quill, half human, half Star Lord who, due to his connection to the earth, feels an obligation to protect it. Quill is joined by Gamora, a badass, green assassin chick who is considered to be the most dangerous woman in the galaxy, Drax the Destroyer, an unstoppable tank who rampages across the galaxy looking for the people who killed his wife and daughter, Groot, the tree like being who, if destroyed, can grow back from just a sprig of his former body, and last but not least, Rocket Raccoon, a fluffy but deadly raccoon like creature who is an expert fighter with a loyal heart. Together, this rag-tag team protects earth from the powers that be and subvert authority at every turn.

Cosmic Avengers begins with a nice little origin story for Peter Quill that shows how he came to be born on earth from a human mother and then moves to the present day where Tony Stark is testing out an Iron-Man space suit. Things quickly go south when Tony comes across a hostile alien force about to cause havoc on Earth so of course the billionaire playboy intervenes. Just as he begins his attack, the Guardians turn up and help Stark take down the aliens. The Guardians win the fight but Groot is caught in an explosion that obliterates him.

Rocket Raccoon manages to stick a sprig of Groot into a plant pot just before they’re captured by a galactic force who arrest them for interfering with Earth. With Tony’s suit taken from him and the other Guardians in captivity things are looking bleak. Luckily however, Groot (who is unnoticed by the guards who assume he’s just a potted plant) regrows and frees the Guardians and Tony. The gang gets back to their ship and make good their escape. 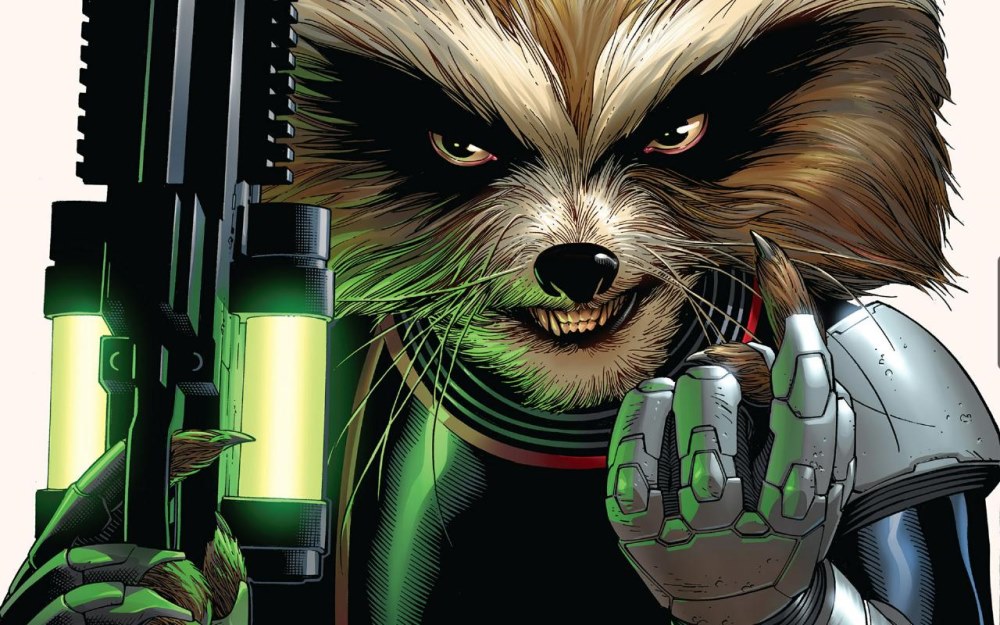 Sure, it’s a pretty basic story but if you’re a newcomer to the series then that’s exactly what you want. Having Tony Stark as a familiar face is a good way to stop readers from feeling too lost and I can understand why many comic nerds agree that this is a great place for noobs to start. Each member of the Guardians gets a cool introduction that gives you a good insight into their character. If you’re excited for the Guardians film and want to learn more then Cosmic Avengers is certainly a good place to start. I should also point out that Marvel are in the process of releasing a Guardians of the Galaxy comic series called Prelude which will act as a prologue to the film. This is going to be released as one whole book soon so you should definitely check that out too.

I think what I like about the Guardians, both in the film and comics, is that they don’t take themselves too seriously. Don’t get me wrong, I love gritty superhero comics like Batman and Watchmen but we’ve had a lot of that kind of stuff lately. I’m looking forward to seeing a superhero film that has more in common with Firefly and Doctor Who than The Dark Knight and Sin City. I think some comics (and certainly their films) have forgotten that it’s okay to have some fun with your characters. Not everything needs to be all doom and gloom.

Feel free to remind me of this review when the film is released and turns out to be worse than The Amazing Spider-man 2.