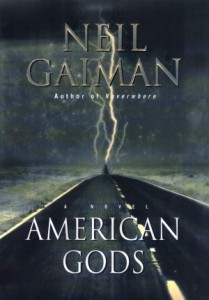 Trying to define what sort of book American Gods is would be challenge to even the hardiest of readers, perhaps even a challenge to Mr Gaiman himself. It’s a fantasy novel sure, but it is firmly set in the present day on Earth, it’s a crime thriller but there are no hard boiled detectives or evil villains, it’s a love story but not like any you’ve ever read, it’s a horror but not because of monsters or ghosts, it’s a history book but it’s up to you to know where the facts end and the fiction begins, and its a philosophical book filled with characters doing inadvisable things. Feeling confused? Good. Welcome to Neil Gaiman’s America and welcome to the world of Gods.

American Gods follows the journey of our protagonist, Shadow as he embarks on trip across America with a mysterious and enigmatic man who calls himself Mr Wednesday, and claims to be a fallen God seeking refuge from the inevitable storm that is coming. When it comes to the plot I’m not even going to give you an inch. The less you know about the book before you start reading, the better. Just know that American Gods had my attention from the first page and didn’t let up until the last. I would read this book until my eyelids were too heavy to keep reading and every morning I looked forward to reading it some more that evening.

If I had to describe American Gods in one word then I would call it ambitious. Reaching for the stars can result in a great fall but I’m pleased to be able to write that Neil Gaiman fulfilled his ambition entirely. The scope of the book is wide and such a scope could be in danger of losing its focus or overburdening the reader, but thanks to his expert writing, I found Gaiman’s novel to be easy enough to follow whilst at the same time thoroughly enjoying the moments where it takes a left turn and tells you a story about events that happened centuries before the main events. These left turns appear to be completely unrelated at first but it’s remarkable how Gaiman manages to suddenly make you understand how these pieces fit in to the big picture.

As its title suggests, American Gods is a book about both America and Gods. These topics on their own are a great undertaking to write about, but Gaiman manages to combine the two effortlessly. Although he is indeed an Englishman, Gaiman manages to express America equally as well as he does the characters that inhabit both it and the book. America itself is very much its own character and as Shadow and Mr Wednesday travel across it, I found myself imagining the landscapes perfectly in my minds eye. In the introduction to the book, Gaiman notes how he always felt a sense of dread that someone was going to ask him how an Englishman could possibly write a book that intends to capture the heart of America. To this Gaiman says “I might not write a Seattle that would satisfy an inhabitant, but I’ll write one as good as a New Yorker who’s never been to Seattle”. As an Englishman myself I can’t tell you if the locations Gaiman writes about are worthy of those that live there, but I can attest that his America certainly falls in line with the American culture that flows through the UK via the internet, television, movies and books. The success of American Gods since its release would suggest that Gaiman did indeed capture America as he intended.

Despite being full of Gods, magic, and fantasy, it could be argued that American Gods is about history. History flows through each and everyone of us and is the ever present backbone of time as it marches relentlessly onwards. American Gods explores the history of America and the hundreds of thousands of souls who arrived as strangers upon its shores as far back as the Vikings. It wasn’t just their ways of life and languages they brought with them, they also brought their Gods, and what happens to a God long after their worshipers have past away and there’s no one left to remember them? What about the new Gods? The Gods we worship in the 21st century? Media, television, and the stock market? How far will these Gods go to ensure they’re not forgotten about too?

American Gods is a hugely original book that had me hooked. Despite its fantasy setting and huge scope, this book still manages to say something about modern life, the things we hold dear to us, the corruption that comes with power, and the cross we all bear whether we be Gods or humans. Do yourself a favour and go buy yourself a copy now.